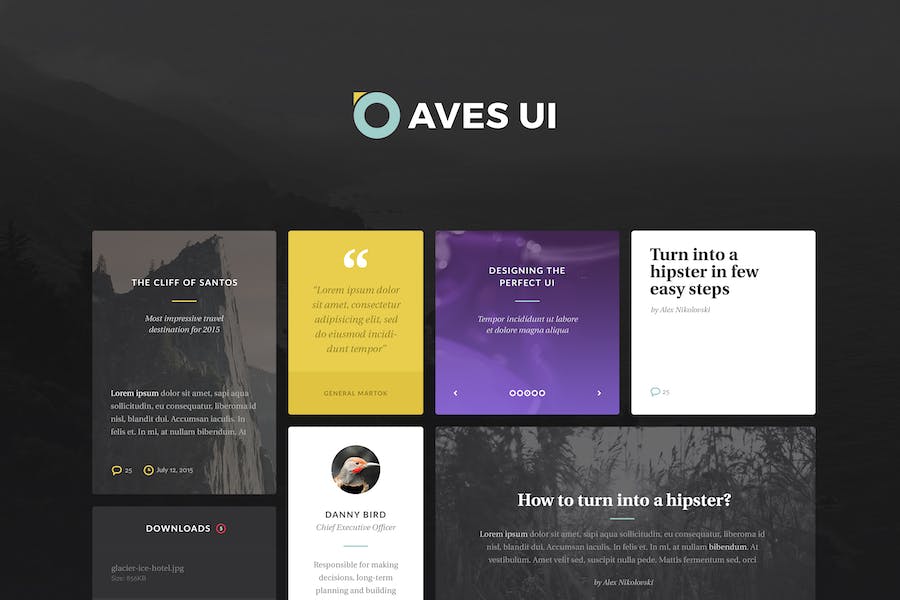 What is Aves UI? - Aves UI is a large user interface kit containing hundreds of web elements, which are going to help you design whole websites in Photoshop with ease. Sets of icons, swatches and actions have been included in the kit.

Organized layer structure - The files are very easy to navigate. All layers are properly named and organized in groups and subgroups.

Free fonts used - The free fonts Lato and Heuristica are used through out the whole kit. They are designed for legibility across web and mobile interfaces and support several character sets, wide array of supported languages, old style numerals and ligatures.

Customizable vector shapes - 100% vector paths are used for all elements. Make your own customizations or resize to retina resolution without losing on quality.

Color palette - Don’t bother choosing the right color. There is a 12 color palette ready for use in the UI kit. The palette is available as a PSD and also as a Photoshop Swatches file.

Resize to retina - Resizing to retina is a piece of cake. Just play the action and voila - your document is ready. All elements are comprised of vector shapes. The images are placed in retina ready smart objects, so you won’t loose quality on those too.

Bonus glyph icons - As a bonus, you get a set of outlined icons available in AI and PSD. The icons were built on a 16x16 grid, which allows you to easily resize them to 32x32, 64x64, 128x128 etc. They are perfectly aligned to a pixel grid and you can also customize the stroke of their outline.

Build whole websites in a minute - With the choice of elements offered and the organized layer structure, building a website is just a matter of combining layer groups.

The photos used in the preview images are not included in the item.