All items/Video Templates/Elements
Love this item?
Download for Free
Enjoy all the benefits of an Envato Elements subscription - free for 7 days:
Start 7-day free trialDownload Preview
Already an Envato member? Sign in here. 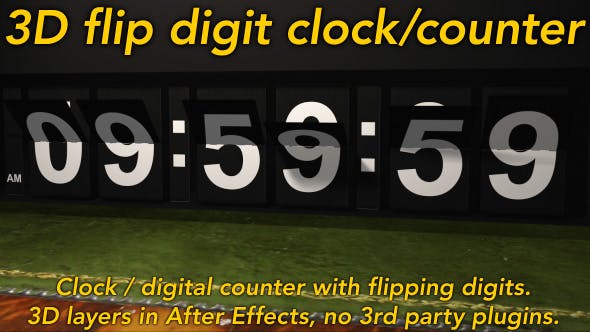 All items/Video Templates/Elements
Love this item?
Download for Free
Enjoy all the benefits of an Envato Elements subscription - free for 7 days:
Start 7-day free trialDownload Preview
Already an Envato member? Sign in here.

This After Effects project generates a clock or counter with a flipping numbers animation, also known as a split flap display, a flip digit clock, or solari board.
The same project can be used to display clock time (also called base 60), or digital time (also called base 10). The difference is whether the numbers count to 59 or 99 before flipping back to 00.
The animation can either animate automatically over time, or be controlled by a single keyframed slider.
The numbers can increase like a clock and timer, or decrease for a countdown.
The font for the numbers and the background can be easily adjusted and customised for your needs. You can have a different font or background for each digit.
The project uses true 3D layers that interact with After Effects lights and cameras, without using any 3rd party plugins.
It is perfect for producing slow, dramatic animations that use extreme camera angles with depth of field.
You can choose between 2 types of flipping animation.
This project is a great starting point for those familiar with animating cameras and working in After Effects 3D space. The project comes with many example setups which were used to make the preview video. It also comes with a very detailed help document to explain all the features, which includes screenshots and explanations of the project structure.
Please note: This is a version 2 project that has been completely re-made from scratch. The older version did not count in digital time (ie base 10) but this new version does. However the project is limited to a maximum of 6 digits, ie 0 to 999999, due to the way Adobe limit the maximum value of a slider to 1,000,000. I cannot modify this project to display more than 6 animating digits.
Please note that no audio is included with the project download, suitable sound effects can be found at Audio Jungle.