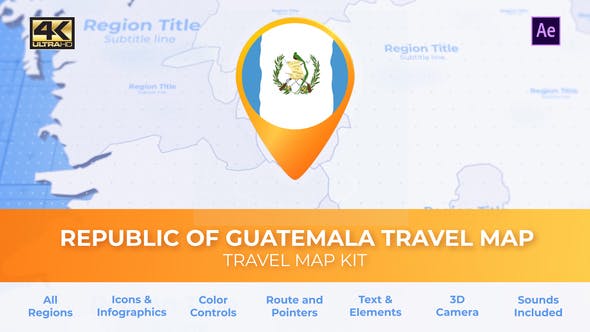 Guatemala Map – Republic of Guatemala Travel Map — supported full HD resolution Guatemala, officially the Republic of Guatemala (Spanish: Republica de Guatemala), is a country in Central America bordered by Mexico to the north and west, Belize and the Caribbean to the northeast, Honduras to the east, El Salvador to the southeast and the Pacific Ocean to the south. With an estimated population of around 17.2 million, it is the most populous country in Central America and has the 11th largest national population in the Americas. Guatemala is a representative democracy; its capital and largest city is Nueva Guatemala de la Asuncion, also known as Guatemala City.

The core of the Maya civilization, which extended across Mesoamerica, was historically based in the territory of modern Guatemala. In the 16th century, most of this area was conquered by the Spanish and claimed as part of the viceroyalty of New Spain. Guatemala attained independence in 1821 as part of the Federal Republic of Central America, which dissolved by 1841.

From the mid- to late 19th century, Guatemala suffered chronic instability and civil strife. Beginning in the early 20th century, it was ruled by a series of dictators backed by the United Fruit Company and the United States government. In 1944, the authoritarian leader Jorge Ubico was overthrown by a pro-democratic military coup, initiating a decade-long revolution that led to sweeping social and economic reforms. A U.S.-backed military coup in 1954 ended the revolution and installed a dictatorship.

Let me present to you a my new project: Guatemala Map – Republic of Guatemala Travel Map.