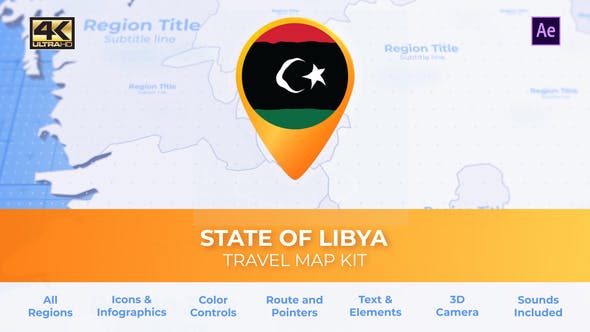 Libya Map – State of Libya Travel Map — supported full HD resolution Libya, officially the State of Libya is a country in the Maghreb region in North Africa, bordered by the Mediterranean Sea to the north, Egypt to the east, Sudan to the southeast, Chad to the south, Niger to the southwest, Algeria to the west, and Tunisia to the northwest. The sovereign state is made of three historical regions: Tripolitania, Fezzan and Cyrenaica. With an area of almost 1.8 million square kilometres (700,000 sq mi), Libya is the fourth largest country in Africa, and is the 16th largest country in the world. Libya has the 10th-largest proven oil reserves of any country in the world. The largest city and capital, Tripoli, is located in western Libya and contains over three million of Libya’s seven million people. The second-largest city is Benghazi, which is located in eastern Libya. The Latin name Libya is based on the name of the region west of the Nile(?) used by the Ancient Greeks and Romans for all of North Africa, and was again adopted during the period of Italian colonization beginning in 1911.

Libya has been inhabited by Berbers since the late Bronze Age as descendants from Iberomaurusian and Capsian cultures. The Phoenicians established trading posts in western Libya, and ancient Greek colonists established city-states in eastern Libya. Libya was variously ruled by Carthaginians, Persians, Egyptians and Greeks before becoming a part of the Roman Empire. Libya was an early centre of Christianity. After the fall of the Western Roman Empire, the area of Libya was mostly occupied by the Vandals until the 7th century, when invasions brought Islam to the region. In the 16th century, the Spanish Empire and the Knights of St John occupied Tripoli, until Ottoman rule began in 1551. Libya was involved in the Barbary Wars of the 18th and 19th centuries. Ottoman rule continued until the Italo-Turkish War, which resulted in the Italian occupation of Libya and the establishment of two colonies, Italian Tripolitania and Italian Cyrenaica (1911–1934), later unified in the Italian Libya colony from 1934 to 1947. During the Second World War, Libya was an important area of warfare in the North African Campaign. The Italian population then went into decline.

Libya became independent as a kingdom in 1951. A military coup in 1969 overthrew King Idris I. The “bloodless” coup leader Muammar Gaddafi ruled the country from 1969 and the Libyan Cultural Revolution in 1973 until he was overthrown and killed in the 2011 Libyan Civil War. Two authorities initially claimed to govern Libya: the House of Representatives in Tobruk and the 2014 General National Congress (GNC) in Tripoli, which considered itself the continuation of the General National Congress, elected in 2012. After UN-led peace talks between the Tobruk and Tripoli governments, a unified interim UN-backed Government of National Accord was established in 2015, and the GNC disbanded to support it. Since then, a second civil war has broken out, with parts of Libya split between the Tobruk and Tripoli-based governments, as well as various tribal and Islamist militias. As of July 2017, talks are still ongoing between the GNA and the Tobruk-based authorities to end the strife and unify the divided establishments of the state, including the Libyan National Army and the Central Bank of Libya.

Let me present to you a my new project: Libya Map – State of Libya Travel Map.