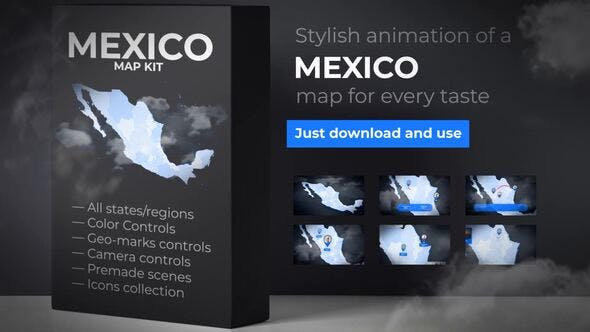 Hi This is the Mexico Map Kit. It will add to your video a stylish animation of a United Mexican States map for every taste.

The project contains absolutely all divisions of the Mexico.

In addition, each division is configured individually.

Working with the template is easy, because the project contains 3 types of settings.

The first type of settings allows you to customize the colors of the map individually for your design.

The second type of settings adjust the position of geo-marks and routes on the map.

The third type of settings is to control camera movement over the map.

So you can come closer to any point with ease.

The template includes a collection of markers and images for maps.

So just download the template right now and add a map to your project.

Mexico is a federation comprising 31 states and Mexico City, a special federal entity that is also the capital city and its most populous city. Other metropolises in the state include Guadalajara, Monterrey, Puebla, Toluca, Tijuana and Leon.

Each state has its own constitution, congress, and a judiciary, and its citizens elect by direct voting a governor for a six-year term, and representatives to their respective unicameral state congresses for three-year terms.

Mexico City is a special political division that belongs to the federation as a whole and not to a particular state. Formerly known as the Federal District, its autonomy was previously limited relative to that of the states.