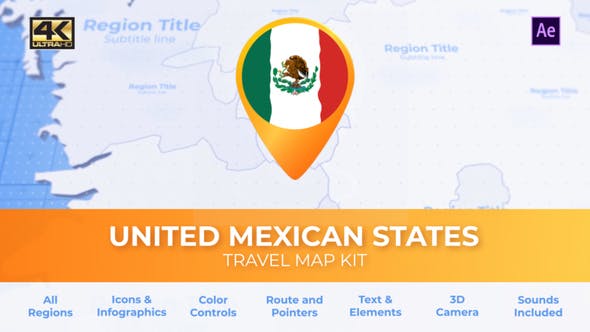 This is the best set to create travel videos. It contains an animated map of the Mexico and eight different types of 3D maps. The map includes all regions of the Mexico. The project is easy to work with because it contains clear controls.

Customize your travel video design in just a few clicks.

Control the 3D camera over the map to get closer to any point of the country. Change the colors of the map and background to get proper design.

Edit the location, color, and size of the pointers to get the design you need. Customize the layout of geo-point connections to show the necessary paths. Change decorative elements to make your map unique. Edit texts on the map to focus on the right regions. In addition, a great number of infographics is included in this set. Use animated elements to create any scene for your travel intro. Choose any icon from a hundred travel icons.

The sounds included in the travel map will add uniqueness to your video.

Finally, save your travel video in four video resolutions to show your video on large and computer screens, on mobile devices, and in social network advertising. Therefore, this template is perfect for creating any travel video. Download the travel map and create your own travel video right now.

Mexico is a federation comprising 31 states and Mexico City, a special federal entity that is also the capital city and its most populous city. Other metropolises in the state include Guadalajara, Monterrey, Puebla, Toluca, Tijuana and Leon.