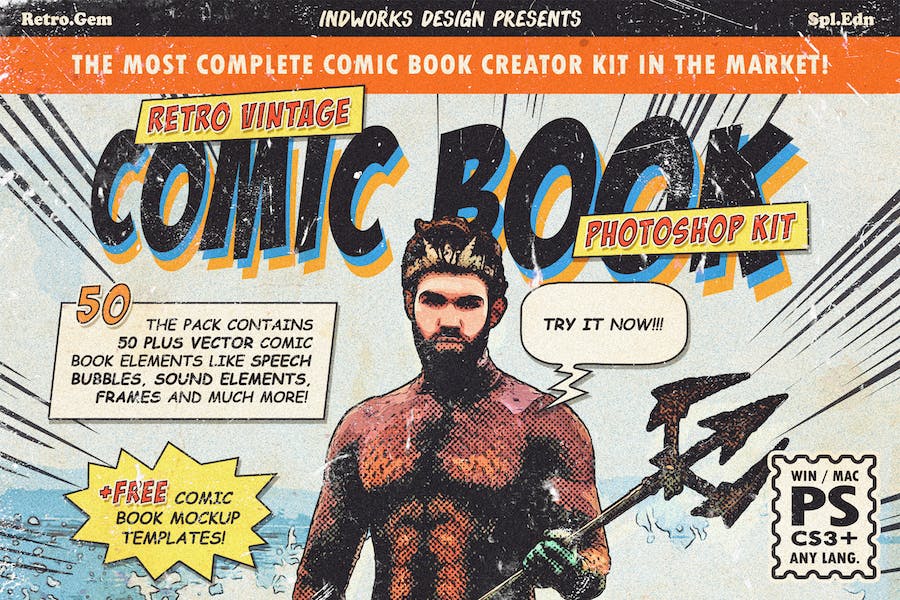 Retro Comic Book Photoshop Action Kit turns your images into realistic hand-drawn comic pages in just a few minutes. The script is intelligently crafted to give better end-user experience. You can simply run it on any of your images and the action will do the rest. You would just need Photoshop (CS3 or newer) and no advanced skill.

The video tutorial link is included in the ‘Help.pdf’ file in the download. The video tutorial covers important steps on how to set up the Photoshop files and in-depth effect customization techniques after the effect has been applied.

Moreover, this action runs on any language of Photoshop.

The action works best with images having size around 2000px – 5000px high/wide and 72/300 dpi resolution. Using lower resolution images will result in lower details and clarity of the final composition.

Retro Comic Book Kit has got covered you from all pages. Save hours of work and take your productivity to the next level with this Photoshop Action Kit!

After you run the action, you have the option to customize the various elements generated and create a masterpiece out of it! You can tweak the different sketch and comic elements generated or transform it into a Comic Book of Art in just a few clicks.

That's not all! All comic elements are vector graphics. So, you can scale and tweak them as much as you want. Also, you can commercialize the end product of the effect. What that means - although you are not allowed to modify and sell the action itself, you can sell the final effects of the images on which you apply the effect.

If you face any issues, feel free to contact at the email provided in the help file.

Images used in the preview are not included in the download package.