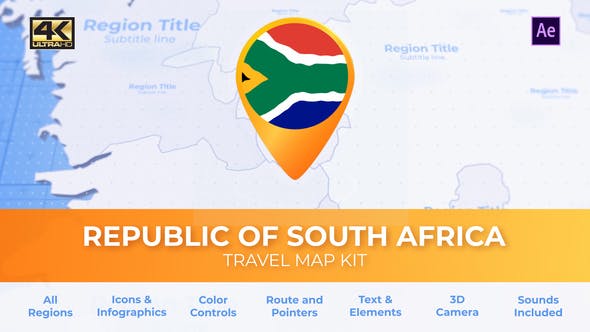 It is bounded to the south by 2,798 kilometres (1,739 mi) of coastline of Southern Africa stretching along the South Atlantic and Indian Oceans; to the north by the neighbouring countries of Namibia, Botswana, and Zimbabwe; and to the east and northeast by Mozambique and Eswatini (former Swaziland); and it surrounds the enclaved country of Lesotho. It is the southernmost country on the mainland of the Old World or the Eastern Hemisphere, and the most populous country located entirely south of the equator. South Africa is a biodiversity hotspot, with a diversity of unique biomes and plant and animal life. Regions of South Africa: Eastern Cape, Free State, Gauteng, KwaZulu-Natal, Limpopo, Mpumalanga, North West, Northern Cape, Western Cape. Let me present to you a my new project: South Africa Map – Republic of South Africa Travel Map.