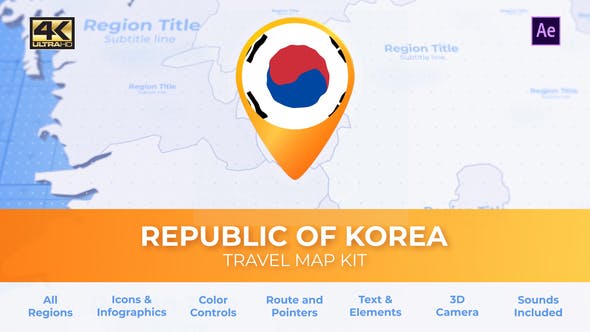 South Korea Map – Republic of Korea Travel Map — supported full HD resolution South Korea, officially the Republic of Korea, is a country in East Asia, constituting the southern part of the Korean Peninsula, and sharing a land border with North Korea. 25 million people, around half of the country’s population of more than 51 million people, live in the Seoul Capital Area, the fifth-largest metropolitan area in the world.

The Korean Peninsula was inhabited as early as the Lower Paleolithic period. Its first kingdom was noted in Chinese records in the early 7th century BCE. Following the unification of the Three Kingdoms of Korea into Silla and Balhae in the late 7th century, Korea was ruled by the Goryeo dynasty (918–1392) and the Joseon dynasty (1392–1897). The succeeding Korean Empire was annexed into the Empire of Japan in 1910. After World War II, Korea was divided into Soviet and U.S.-administered zones, with the latter becoming the Republic of Korea in August 1948. In 1950, a North Korean invasion began the Korean War and after its end in 1953, the country’s economy began to soar, recording the fastest rise in average GDP per capita in the world between 1980 and 1990. The June Struggle led to the end of authoritarian rule in 1987 and the country is now considered among the most advanced democracies in Asia, with the highest level of press freedom.

Let me present to you a my new project: South Korea Map – Republic of Korea Travel Map.