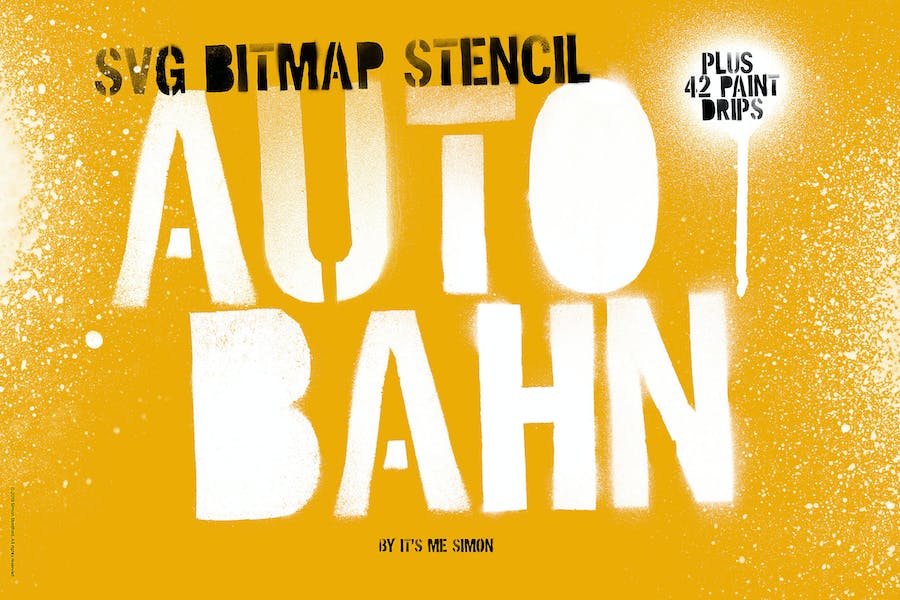 Autobahn is a bold display stencil typeface that has a monumental amount of spray paint detail.

A traditional vector font as one colour and no transparency. Autobahn has full transparency and thousands of shades of black and grey. The OpenType-SVG Bitmaps technology gives the font so much more detail than the old font format.

How to change the colour in Photoshop—https://youtu.be/-ZScex2r1wo

How to change the colour in Illustrator—https://youtu.be/26yCCrlG1Rw

I created Autobahn with real stencils, real spray paint and real paper. All hand cut by my little digits and converted to a typeface.

Included in the download are 42 high-resolution real spray paint drips. Use them to add extra detail to your type work or use them for other projects.

Autobahn emulates a real stencil font, so is far from perfect. Some letters have overspray, others have paint splatters, and some look clean and crisp.

Each glyph has its own unique texture. The font is messy and edgy just like it would be in the real world.

The typeface is ideal for getting that urban street style or the military look. Suitable for advertising, posters, packaging, album covers, headlines, book covers and packaging or anything where you want that unique graffiti vibe.

Autobahn is a unicase typeface—it has no lowercase letters. Everything is in uppercase. It does contain alternative uppercase letters in the lowercase a-z. It also has a few alternative glyphs with the counters removed. So with at least two alternatives for each letter, you can get a more random look.

OpenType-SVG bitmap is a new technology. Support is limited but improving.

Windows user, you might not see your letters when you install the font, but it does work in the applications mentioned above.

Adobe Indesign does not fully support OpenType-SVG bitmap fonts—so buy this at your own risk. You have been warned.

If your software is too old I've provided high-resolution images, so you can still manually compose letterforms inside Photoshop or your application of choice.

If you have older versions of the above software, you could still use the font. I've included high-resolution images of each letter. You will need to compose your lettering inside Photoshop or Illustrator and import into any other application as an image. Not ideal, but very handy if you want a high-quality type but with older applications.

A standard vector font is included, but it’s nowhere near the quality of the OpenType-SVG Bitmap font.

Included with the OpenType-SVG font

Included with the Vector font