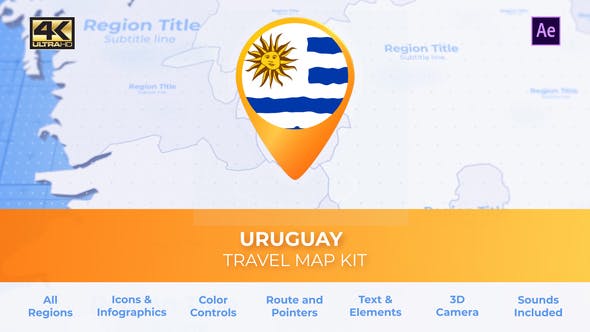 Uruguay Map – Oriental Republic of Uruguay Travel Map — supported full HD resolution Uruguay, Portuguese: Uruguai, officially the Oriental Republic of Uruguay, is a country in the southeastern region of South America. It borders Argentina to its west and southwest and Brazil to its north and northeast, with the Rio de la Plata (Silver River) to the south and the Atlantic Ocean to the southeast. Uruguay is home to an estimated 3.51 million people, of whom 1.8 million live in the metropolitan area of its capital and largest city, Montevideo. With an area of approximately 176,000 square kilometers (68,000 sq mi), Uruguay is geographically the second-smallest nation in South America, after Suriname.

Uruguay was inhabited by the Charrua people for approximately 4,000 years before the Portuguese established Colonia do Sacramento in 1680; Uruguay was colonized by Europeans relatively late compared with neighboring countries. Montevideo was founded as a military stronghold by the Spanish in the early 18th century, signifying the competing claims over the region. Uruguay won its independence between 1811 and 1828, following a four-way struggle between Portugal and Spain, and later Argentina and Brazil. It remained subject to foreign influence and intervention throughout the 19th century, with the military playing a recurring role in domestic politics.

A series of economic crises put an end to a democratic period that had begun in the early 20th century, culminating in a 1973 coup, which established a civic-military dictatorship. The military government persecuted leftists, socialists, and political opponents, resulting in several deaths and numerous instances of torture by the military; the military relinquished power to a civilian government in 1985. Uruguay is today a democratic constitutional republic, with a president who serves as both head of state and head of government.

Let me present to you a my new project: Uruguay Map – Oriental Republic of Uruguay Travel Map.