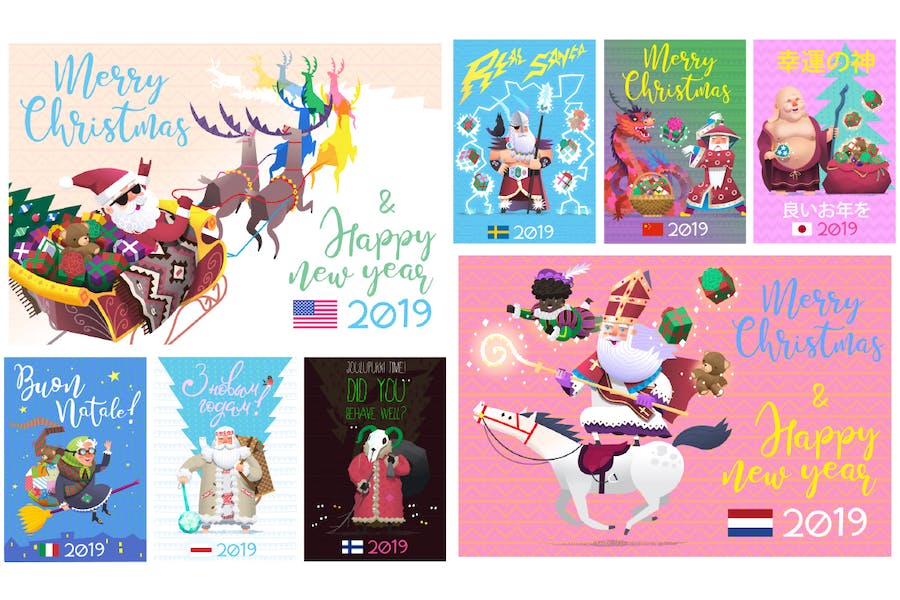 Why do we have winter holidays? Because we want to remind ourselves that winter won't last forever. Each culture has it's own winter traditions with celebrations, decorations, meals and entertainments. But what we all have in common is an old man bringing presents.

Here is a set of 8 cards with holiday greetings and characters bringing gifts in different cultures:

Saint Nicolas - famous Western Christian bishop. In this case it's actually Sinterklaas with his helper Zwarte Piet. Santa Claus - the one we know today. He is riding sleigh with his reindeers. La Befana - Italian old lady. She brings gifts on Epiphany. Joulupukki - Finnish character from pagan times, who dresses like goat and punishes those with bad behavior. Odin is believed to be Santas predecessor in Scandinavian countries. Vikings received gifts from him during the Yule season. Father Frost - pagan old man from Eastern Europe who delivers gifts on Kalyady. This one is Belarusian Zyuzya. Hotei - Buddhist god who shares happiness, laughter and luck which he carries in his cloth sack. Sheng Dan Lao Ren - Chinese figure who brings presents on Christmas.

All images come in vector ( Ai ) They are fully drawn and easily editable.